Last night Clif and I went to Winthrop’s very own Van der Brew for the Dennis Price Comedy Hour.  Van der Brew is a huge—but comfortable—place, and it was full, full, full of fans eager to see Dennis’s show. 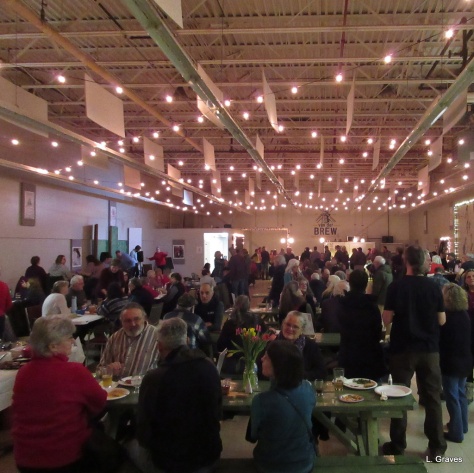 The line for beer was long, but Clif was patient and eventually got a pint of Lily Bay IPA, which seems to be glowing. No surprise. After all, Van der Brew is a special place.

I have known the buoyant, inimitable Dennis Price for over twenty years. I met him when he was a young intern at the Theater at Monmouth, a summer theater the next town over from us.  Dennis is from Virginia, but lucky for us, Dennis decided to stay here, settling in central Maine. Along with acting, Dennis has taught at area high schools and is now the manager of Capital City Improv, where according to its Facebook page, he and his merry band of comics “present world-class improv comedy right before your eyes, ears and funnybones.”

After all, “The world needs more laughter…” It certainly does. As Roger Rabbit put it, “Sometimes in life, it is the only weapon we have.”

And laugh we did as Dennis and company romped, did impersonations, asked trivia questions, and most impressively, perhaps, came up with skits on the spot with prompts from the audience. In particular, their take, wit, and verbal agility in telling a story about the transfer station (once known as “the dump”) had everyone laughing.  Holy cats, they were good.

When the humor is lighthearted—as it was last night—it is a wonderful feeling to laugh along with a crowd of people.  It lifts the spirits, and if ever there were a time when spirits needed lifting, it is now.