By Maine standards, we are having an extremely mild winter. While we have had a cold day here and there, for the most part the weather has been in the 30s and 40s, not at all typical for Maine in January and now February.

We haven’t had much snow, either, and in sunny spots in town, the snow is pretty much gone. Because we live in the woods, we still have some snow, but it has pulled away from the road, and it seems that we are in late March rather than February.

Readers, it is just plain weird to have weather like this in Maine in mid-winter.

Here is a picture of our road taken in February of last year. 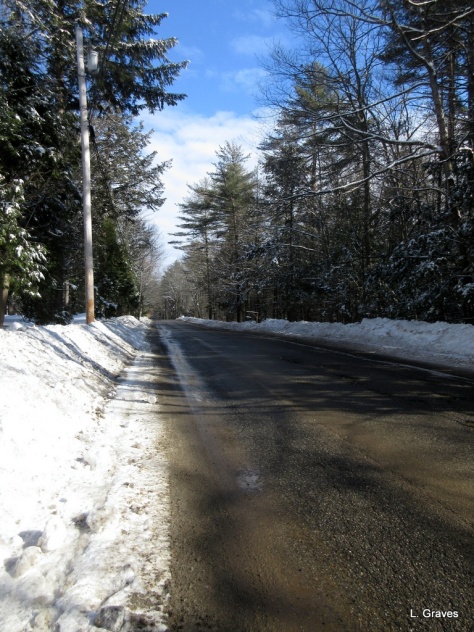 Here is a picture taken yesterday when Clif and I went on a Sunday walk up the road.

As you can see, there is quite a difference. Now, for those who live in a warmer climate, it might seem strange to complain about weather that is still chilly but is warmer than usual for this time of year. And to mourn the lack of snow.

But I was born in Maine and have lived here for most of my sixty-two years. To me, winter means snow and cold, and it feels wrong to have it otherwise. One mild winter by itself would not be a cause for concern, but I am old enough to remember when we did not have ticks, Japanese Beetles, cardinals, or red-bellied woodpeckers. Lots of changes in sixty years.

There are some good things about a mild winter. The ice on the sidewalks and driveways is mostly gone, and it is easier to get around. Warmer weather also makes it less expensive to heat the house, and this is a blessing for those of us who live on a tight budget

On one hand, on the other hand. We humans love to weigh things and make comparisons, to note the bad and the good.

But some of us wonder what it will be like ten years from now, in Maine and around the world.