With today’s post, I am joining Donna, of Retirement Reflections, for October’s What’s on Your Bookshelf challenge. Thistles and Kiwis is also taking part in the challenge, and one book on her list was written by a Maine author. How about that? A Maine book in New Zealand.

Below is a photo of the books I read in October, and it illustrates my eclectic tastes. I am a reader who likes stories about everyday life, but I also like stories that feature myths, magic, and archetypes. However, whether a book is a slice of life or high fantasy, everything I read shares the same requirement: It must be character driven. I really dislike books with one-dimensional characters who are marched through the plot. 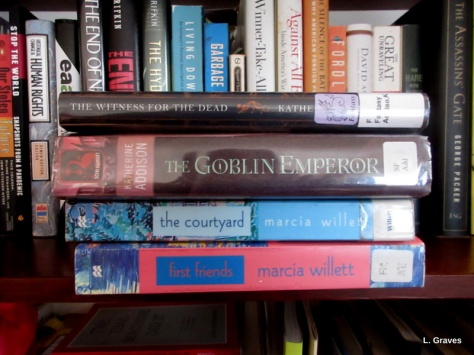 Marcia Willett, an English author I discovered via A Corner of Cornwall, writes about everyday life in Cornwall and Devon. Romance figures heavily in her stories, and I must admit that romance is not my favorite genre. However, when it comes to her characters, Willet is both sympathetic and shrewd, a winning combination for this reader.

Although at times overwritten, Willet’s books are usually a bon-bon of a read. The Courtyard, with its swirl of characters, young and old, certainly falls into this category. Old age and poverty are addressed with compassion. Infidelity rears its ugly head, but there is also forgiveness. The extreme difficulties of some of the characters are perhaps too neatly resolved, but the book’s message of friendship and generosity never gets old.

Alas, the same cannot be said of First Friends, a tedious chronicle of the many infidelities of navy wives and their husbands. This is Willett’s first book, but fortunately I had read several other of her books before First Friends. Pardon the tangle of puns, but if I had read First first, it would have been last.

Speaking of last…I have saved the best for last—Katherine Addison’s goblin/elf books.

Uncharacteristically for fantasy, both books, set in the same magical steampunk realm, are primarily character driven. In The Goblin Emperor, Maia, the main character, half-elf, half-goblin, is the unloved child of his father, the emperor. When Maia’s father and brothers are killed in an airship crash, Maia, young and inexperienced, becomes emperor. Struggling to remain decent, Maia must navigate the intricacies of court life while dealing with various treacheries and plots.

Densely and beautifully written, The Goblin Emperor is referred to as a fantasy of manners, where, according to Wikipedia, “The protagonists are not pitted against fierce monsters or marauding armies, but against their neighbors and peers; the action takes place within a society, rather than being directed against an external foe; duels may be fought, but the chief weapons are wit and intrigue.”

For those who don’t read fantasy, The Goblin Emperor would be a good way to ease into the genre.

The Witness for the Dead is set in the same world as The Goblin Emperor, but with a different protagonist— Celehar, a minor yet important character in the first book. Celehar is able to get thoughts, impressions, and memories from those who are newly dead and is therefore able to help solve crimes, settle disputed wills, and in general tidy up the loose ends that those who have died sometimes leave behind.

There is still political intrigue in The Witness for Dead, but the story is also a murder mystery, another genre I don’t usually read.

But with these two books, Addison proves that genre is not important when the writing is good and the story revolves around a vivid character.

42 thoughts on “What’s on Your Bookshelf—October 2021 Edition”