Yesterday, our friends Jim and Dawna came over for dinner. We had hoped the day would be fine so that we could eat on the patio and Clif could make his legendary grilled bread. Unfortunately, the weather gods had other ideas, and it rained, rained, rained. Not just a light soaking, but instead a downpour.

So in we stayed. Dawna brought margaritas and chips and a hot cheese appetizer. Very tasty! Even though it was more a soup day than a salad day, I stuck to my original plan of a salad meal. However, the grilled bread was out, and I made a pan of cornbread. For dessert we had homemade chocolate ice cream.

With Farmer Kev’s delectable red and green lettuce, I made a salade niçoise, sort of, using a recipe by the inimitable Mark Bittman as a guideline. My salad niçoise had, along with the lettuce, hard-boiled eggs, sliced radishes, sliced cooked potatoes, sliced tomatoes, and tuna. (Note: Tuna is overfished, and we only eat it once or twice a year on salade niçoise.) I made a homemade vinaigrette to go on the salad. Capers would have been a good addition as would have olives and green beans. 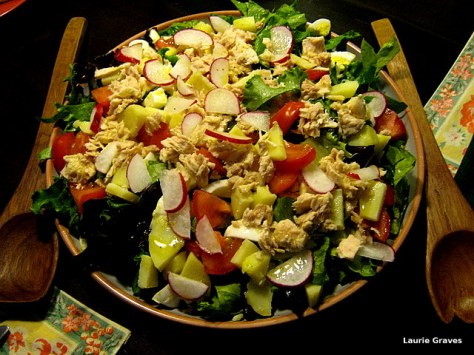 I also made a Greek pasta salad to go with the salade niçoise. The Greek salad had mini penne, which are adorable, feta, tomatoes, Swiss chard, basil, mint, and several squeezes of lemon. It’s one of my favorite summer salads.

Dawna, Jim, and Clif are all accomplished photographers, and whenever we get together, at some point the talk inevitable turns to photography. I am the novice of the group, and I always learn something from these discussions. Yesterday was no different, and the advice I got from Dawna was “watch where you stand,” which apparently comes from the Ansel Adams quotation: “A good photograph is knowing where to stand.” (In Adams’s case, he often stood on the roof of a vehicle to get his sweeping photos.) Yes, indeed. Some angles are better than others, and distance from the subject is also a concern.

I gave Dawna a few of my photo cards, including one of the grasshopper that stole the show on my most recent Wordless Wednesday post (6/24/15). We marveled at his eye, at his tiny wing, at his little black feet. “It looks like he’s wearing shoes,” Dawna said.

It’s not every friend who brings margaritas to your house and marvels over a photograph of a grasshopper. But Dawna is that kind of friend.

How lucky I am!

And for those who missed the photo, here is the grasshopper in all his (or her) glory.

2 thoughts on “A Rainy Sunday in which We Drink Margaritas, Eat Salad, and Marvel at a Grasshopper”