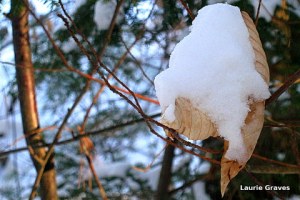 Yesterday was an especially pretty day to walk in the woods. On Monday, we had a small snowstorm—about four inches—just enough for the hard-packed snow to have a fluffy, glittering cover. As I approached the Narrows, I saw a deep blue that I mistakenly thought was open water. Silly me. The past two weeks have been so cold that the Narrows is iced over. Instead, I was seeing blue shadows on the snow. So lovely.

I spied more little tracks left by some woodland creature.

After an hour of looking and walking and taking pictures, I headed home. Sometimes the dog was ahead of me, sometimes he was behind, and periodically he would stop to clean the clumped snow from his paws.

When, I got home, I peeled off layer after layer of clothes, made some Earl Gray tea, and settled at my desk to look at the pictures I had taken.

3 thoughts on “Into the Woods after a Little Storm”