Today, during a pandemic, during a snowstorm, we had to bring our cat Sherlock to the vets and have him put down. A day or two ago, he had what was most likely a stroke although we didn’t know it at the time.  We noted stiffness in Sherlock’s back leg and thought it might be arthritis. We had planned to mention it to the vet in a spring appointment.

However, by this morning Sherlock was dragging himself around by his front paws, unable to stand or walk. He wouldn’t eat or drink, and we could tell by looking into his eyes that the end could be measured in days rather than months or years. Because of the pandemic, we couldn’t be with Sherlock when he was euthanized, and that was hard. All we could do was watch as the assistant took him away.

We made the right choice, and we know this, but it was not an easy one. Our fur buddies mean a lot to us, and the decision to have one of them put down always fills me with grief, which, in a strange way, seems fitting. To expand love to a creature from another species strikes me as a very, very good thing, especially when you think of how often it is that we don’t even love members of our own species. The  more we can widen our circle of love, the better it is.

Sherlock was not what you would call an easy cat. From the moment I brought him and his litter mate Ms. Watson home, I knew Sherlock was going to be a challenge. That first day, he climbed my back ten times as I tried to work. Not exactly a laid-back cat, and this picture Clif took of Sherlock as a kitten shows his “cat-attitude.” But he sure was cute, wasn’t he?

Sherlock had the lamentable habit of biting the hand that patted him. He was also a bully, and Sherlock kept the meeker Ms. Watson in a constant state of agitation. And yet. As our daughter Shannon put it, Sherlock was a punk, but he could also be very sweet. Yes, he could.  Sherlock loved to lie on my lap on top of “his” special fleece blanket. (Without the blanket, it was no good, and unless the evening was stinking hot, I had the blanket on my lap for him.) Despite the biting, Sherlock was extremely social, and, as our other daughter Dee observed, he always liked to be part of the action and usually attended our Zoom meetings.

At any rate, we loved this punk, and we already miss him.

Here are some pictures of Sherlock from his younger, better days. 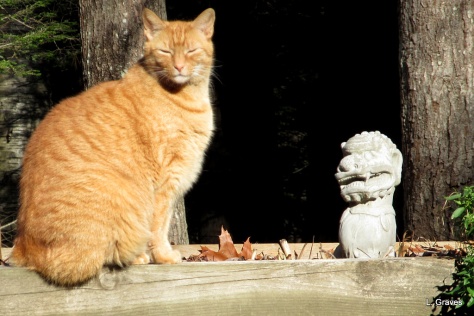