Here we are in March, which in Maine means peak ugliness. The snow is melting. There is mud. There are dirty snowbanks.

This little beauty is not far from our home.

See what I mean? I wasn’t exaggerating even one little bit about peak ugliness in Maine in March.

Flowers are still only a dream. Instead, we have last season’s dried remnants clinging to branches.

But, but, and but. I am an American, and even in this time of the novel coronavirus—whose true name is now SARS-CoV-2—and the terrible lies and incompetence coming from those at the top who should know and do better, I wanted to find something good in this God-awful month.

And, lo and behold: I did find something. Two somethings, actually.

Just up the road from us is a magnificent tree that was horribly damaged during the Great Ice Storm of 1998. After the ice storm, the tree looked as though it had been maimed. (Unfortunately, I don’t have any pictures of the tree when it was in that sorry state.) Even though this tree is not on our land, we love it dearly and worried about it.

But twenty-two years later, the tree is thriving, beautiful in any season, even March.

Not far from this magnificent tree there are other smaller trees providing sap to a neighbor who taps them every year. 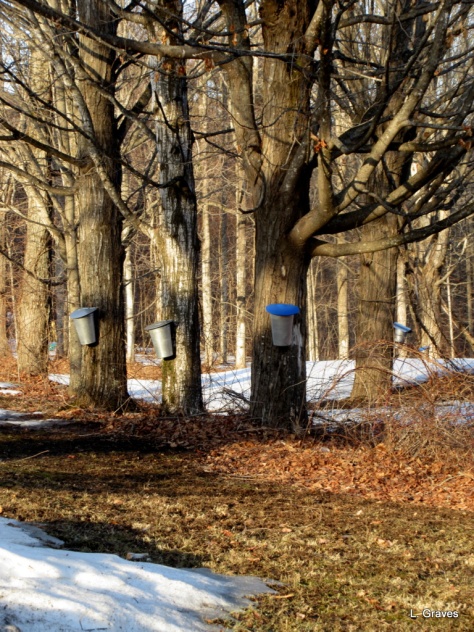 While March brings peak ugliness, especially this year, it also brings the running of sap, which in turn is boiled down to one of nature’s sweetest gifts—maple syrup.

Can pancakes be far behind?

36 thoughts on “Peak Ugliness, but Also Resilience and Sweetness”