Fortunately, the title of this post does not come from personal experience. So far, there have been no corpses in my compost.

Instead, this is the title of a mystery novel written by A. Carman Clark. This lovely book captures the essence of rural Maine through the eyes of its protagonist, Amy Creighton, a woman of boundless curiosity who loves to cook and garden. She cherishes her solitude, but at the drop of a hat, she is ready to make muffins for friends and guests. When a corpse turns up in a neighbor’s compost, what is this freelance editor to do but to start investigating?

Amy’s knowledge of small-town life and her sympathy for the confined lives of some of the villagers makes her a sympathetic listener for both young and old.  Gradually, the details of the crime begun to emerge.

A. Carman Clark, a good writer and a good cook, was a friend of mine. When she was eighty-three, Arley published her first Amy Creighton mystery, The Maine Mulch Murder. Encouraged by the reception, Arley wrote a second book, The Corpse in the Compost. Unfortunately, Arley died before it was ready to be published, but she did leave a draft manuscript with notes and suggestions from a friend, from an editor, and from her daughter Kate Flora, also a writer.

On the Maine Crime Writer’s blog, Kate writes “Two summer ago, in the space between my own books, and nudged by Ann and Paula at the Mainely Murders bookstore http://mainelymurders.com, who had created a following for Maine Mulch, I sat down with the manuscript and started editing. As I’ve blogged about before, there were a lot of questions I wanted to ask my mother. As she was unavailable, I had to wing it. I’ll never know whether I made the right choices. But we were close, and I could usually find her ‘voice’ in making changes or amendments to the book.”

“The Corpse in the Compost” is available through Amazon: https://www.amazon.com/Corpse-Compost-Amy-Cre…/…/ref=sr_1_1… 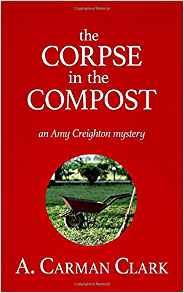 Be sure to buy two copies: One for yourself and one for a gift.  This is a gem of a book you’ll want to give to your mystery-loving friends.

22 thoughts on “The Corpse in the Compost”