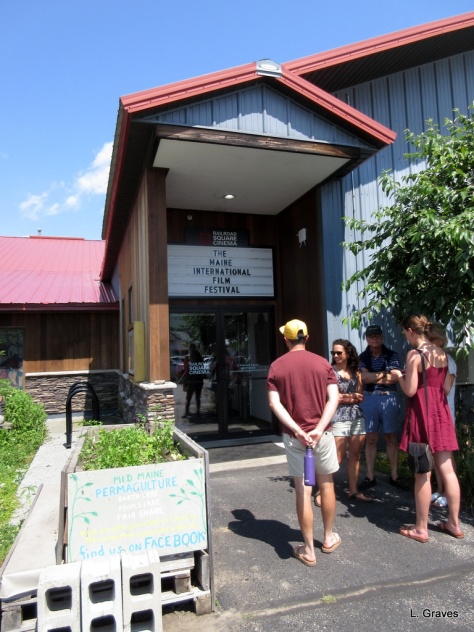 What a week it was at the Maine International Film Festival, also known as MIFF! (I wrote about MIFF in my last post.) Every year we have a fabulous time watching movies, many of them foreign, that will most likely never come to a theater near us. We eat out. We have drinks. We meet with friends.

But this year was even more extraordinary because of a fourteen-hour Argentine film called La Flor.  No, I did not make a typo when I wrote “fourteen-hour.” According to Wikipedia, La Flor has “a length of 868 minutes including intermissions.” Even by MIFF standards—past festivals have included long films—La Flor is unique both in its scope and length.

Did we sit for a fourteen-hour stretch to watch La Flor? We did not. The movie was shown in four parts, one per day. Here is a short description from Wikipedia: “La Flor is broken into six separate episodes, connected only by an on-screen appearance by Llinás [the director] explaining the film’s structure. The first four episodes have the beginning of a story but finish in medias res. The fifth episode is the only one to proceed from start to end, and the last episode has just the conclusion of a story. ” Four actresses—Elisa Carricajo, Valeria Correa, Pilar Gamboa, and Laura Paredes—star in different roles in five of the episodes.

Clif, Dee, and I quite sensibly decided to start with the first part of La Flor and then go from there. We were immediately taken by the energy of the stories—the first a grade B movie about an extremely scary mummy and the second a tale about two musicians who were once a couple but have separated and try to come together to record a song. Without the outstanding acting of the four actresses listed in the paragraph above, none of the episodes would have worked. These talented actresses held La Flor together.

By the time we were done with the La Flor, Clif, Dee, and I felt like MIFF warriors, and the small band of moviegoers who made it to the end felt the same way. I nearly proclaimed, “We few, we happy few, we band of moviegoers.” We all agreed that we deserved purple heart badges.

You might be tempted to scoff at us. After all, how hard can it be to sit and watch movies? If we’re talking about, say, Spider Man or Toy Story or some romantic comedy, it’s not that hard. (But fun!) However, when you’re watching a movie of La Flor‘s length and reading subtitles the whole time, it is an intense albeit rewarding experience.

The same could be said for most of the movies at MIFF, and we saw others besides La Flor. Few of them are fluff, many of them are foreign, and after a while, fatigue sets in. I heard one moviegoer exclaim, “I ache all over.” With my creaky knees, I could certainly sympathize.

Still, we wouldn’t miss this film festival for anything. Although Clif and I are tired, and it will take us a few days to recover, we also feel letdown that the festival is over and that Dee is back in New York.

But there is work aplenty. My third unfinished book—Out of Time—beckons. So onward, ho.