Today, I flipped the calendar from February to March, and I said in a grumbling voice, “Oh, boy! Here it comes.”

Long-time readers might recall how much I hate the month of March, and I know many, if not most, Mainers feel the same way. March—damp, muddy, and soggy—is such a miserable month in Maine that it deserves to be labeled a season unto itself. Potholes the size of the Grand Canyon open in our roads, and yesterday I almost lost the car in one not far from our mailbox. (Yay for the Winthrop road crew, who bravely came this morning to fill the hole. I don’t think any of the crew disappeared, never to be found.) Little kids lose their boots in the mud. Adults walk hunched over, waiting for spring. Dear blogging friends, if ever you decide to come to Maine, do not come in March.

For those who have birthdays in this month, thank goodness for you all. I salute you, even though you didn’t have any choice in the matter. You are the bright points in otherwise dismal month.

In anticipation of the March blues, I have filled the month with interesting activities—a concert, a lecture, a movie, a friend over for pizza, See’s chocolates, and—ta, dah!—an anniversary outing. Yes, Clif and I got married in the not-so-lovely month of March. What can I say?  We were both college students and getting married on our spring break seemed like the thing to do. It was the 1970s. We were more casual back then.

This first day of March brings the return of Snow-gauge Clif, who will be making weekly appearances until all the snow is gone, probably sometime in mid-April. He was such a hit last year, that we decided to bring him back.

Here is snow-gauge Clif in the front yard. 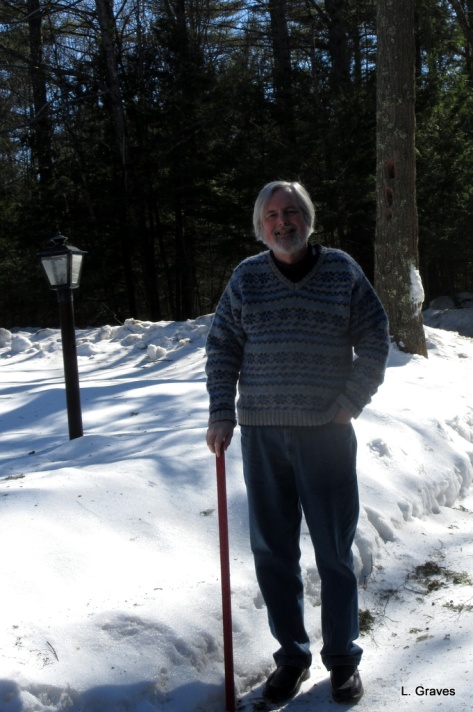 And here he is in the backyard.

Will there be more snowstorms this March? Does New York City have the best pizza? You bet there will, and one is slated for Sunday and Monday, eight inches of wet, heavy snow.