I could write about how this has been the Marchiest March we Mainers have had to endure in quite a while. Lots of snow,  plenty of mud—and we’re just starting with the melting—and joy of joys, another storm on the way with wet, heavy snow forecasted.  I could share this quotation I found on Facebook: “Maine. They call it ‘Vacationland’ because it sounds better than ‘Six Months of Suffering-Land.'”

But no, I’m not going to brood about the weather. Instead, I’m going to turn my attention to a much happier topic—books—and how I coincidentally came upon two authors who write children’s books and how those authors turned out to be connected, even though they write very different stories.

About a month ago, my husband Clif introduced me to the middle-reader fantasy 100 Cupboards by N. D. Wilson. It’s set in Kansas, just like another famous children’s fantasy, and the protagonist, Henry York, discovers magical cupboards (portals) in the attic room he’s staying in while visiting his aunt, uncle, and cousins. Overprotected and somewhat neglected, Henry finds warmth, solace, and generosity with his aunt and uncle. Much of the book focuses on the everyday domestic life in a small town, with large dollops of barbecues and baseball. But through a magical cupboard Henry eventually goes, where he encounters strange mystical lands, an evil witch, and a mystery that takes him right back to Kansas. 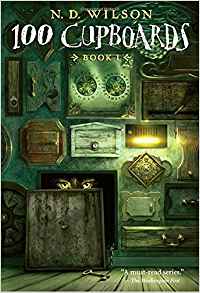 I liked 100 Cupboards so much that I immediately read the sequel, Dandelion Fire, which dispenses with the domesticity and hurtles Henry headlong into the fight between good and evil, the concern of most good fantasy novels. There’s a third book in the series—Chestnut King—which I definitely plan to read.

A week or so ago, on a blog I follow—Letters from a Hill Farm—I came across a book recommendation, The Penderwicks by Jeanne Birdsall. A day or two later, I found The Penderwicks at a bookstore, The Book Review, which I recently visited for the first time. (I’ve written about the book and the bookstore a couple of posts ago.) I loved The Penderwicks so much that I borrowed the next three in the series from our library, and I’m whipping through those books the way I would a box of chocolates.

Now as far as writers go, N. D. Wilson and Jeanne Birdsall couldn’t be more different, even though they write for the same age group.  As I indicated earlier, Wilson’s books are classic fantasies. Family is important—as it turns out, very important—but so is the larger story of the battle between good and evil. With her Penderwicks series, Birdsall focuses exclusively on the family, with its gentle ups and downs and the relationships of the various characters. Death brings a thread of sadness into these stories of four sisters and their father, but these are quiet books compared with Wilson’s fantasies. You might even call the Penderwicks series the Miss Read books of children’s literature. (However, Little Women was Birdsall’s inspiration.)

Here’s where the weird coincidence part kicks in. I like to read author websites, where I can find out a little bit more about writers and their books. I was reading Jeanne Birdsall’s author website, and I came across an event that featured both Birdsall and her friend (her wording) N.D. Wilson, where they would discuss Narnia. Unfortunately, the event took place last year in Chicago, and as I have no portals (or a Book of Everything) to take me back in time and across the country, this qualifies as a missed event.

Still, what a strange coincidence to come upon that nugget of information. Two months ago, I had never heard of either N.D. Wilson or Jeanne Birdsall. Now, not only am I fan of both writers, but I discover they are friends.

Thinking about books, authors, and neat coincidences sure beats brooding about snow.

23 thoughts on “By a Strange Coincidence…from N.D. Wilson to Jeanne Birdsall”