I’ve been getting updates from my daughter Shannon in North Carolina. A snowstorm is heading her way—six to seven inches are predicted—and it’s already throwing people in a tizzy. Yesterday, my son-in-law, Mike, took this picture of the milk case in a grocery store in North Carolina. 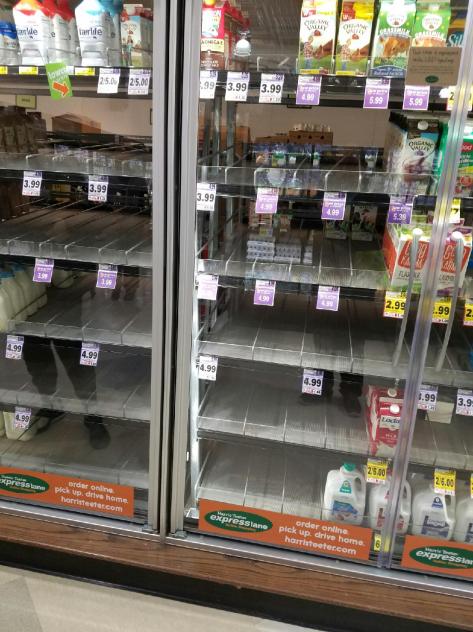 This morning, here is what Shannon wrote in an email about the approaching snowstorm:

“It’s not suppose to start until later this afternoon/early evening and is most likely going to be rain at first and then mixed precipitation (yay!) so hopefully our commute home won’t be too bad. The main event is going to be later 11pm-midnight and at that point it’s going to be all snow – and then it’s suppose to continue through mid-day Saturday. We’re smack dab in the 5-7 inches range right now. Our new governor has declared a State of Emergency for all counties in NC and after school activities were already being canceled yesterday for most and the rest did so this morning.

“It was just crazy at the supermarket yesterday – I didn’t time it exactly but it was three hours after getting out of work that we walked through our front door. Some of that (maybe 20-30 minutes) was travel time and then we stopped and picked up some food on our way home (another 10-15 minutes) and the rest of it was spent in the grocery store – it was a madhouse!”

Now, I realize the South is unprepared for any kind of snowstorm at all. They simply don’t have the equipment to deal with snow, a rare event in North Carolina.

However, as a Mainer, it’s a little hard to understand getting upset about only six or seven inches of snow, and it almost seems as though Shannon and Mike have moved to a foreign country. As my daughter pointed out in another email, we got a foot of snow the night before she and her husband were supposed to leave Maine and head back to North Carolina. In the morning, within an hour, the driveway was cleared enough for them to leave, and the roads were well plowed.  Shannon and Mike left when they had planned and had no trouble driving.

This has made me reflect that when you live in Maine, you have to be adaptable. The seasons rock between extreme cold with snow and ice to extreme heat and humidity. We have to be prepared for it all, and I must admit that I take pride in being able to do so. This adaptability leads to a certain flexibility as well as a can-do attitude.  While we Mainers certainly take the weather seriously—nowadays, all people should take the weather seriously—we feel as though we can cope with the extremes.

In my pantry are cans of soup and baked beans. There are also buckets of water in the basement in case the power goes out. We have propane for our little camp stove, and lamp oil for our lanterns. We even have extra batteries for our flashlights.

And to Shannon and Mike and all in the South who are the storm’s path, stay snug and warm and safe.