Yesterday, the weather was absolutely perfect for the Fourth, and the patio was a very fine place to be. We had a feast of appetizers, and the consensus was that this should be an ongoing plan for future Fourths. 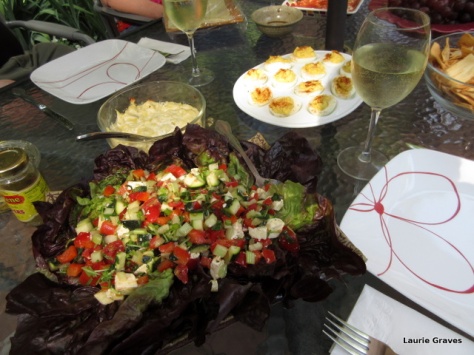 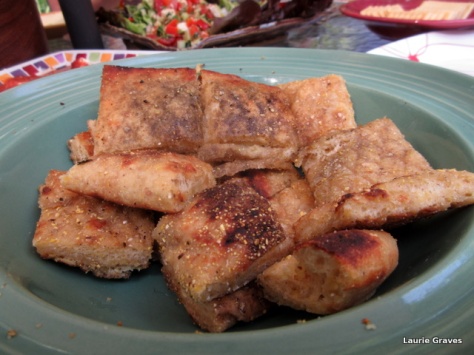 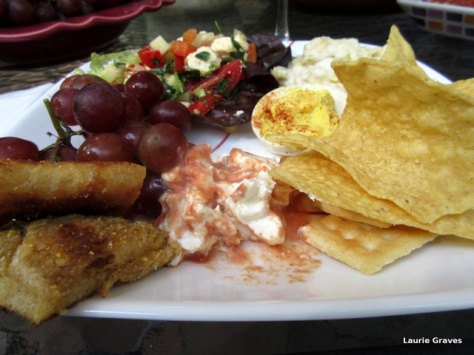 Simply put, in the past, there had been too much food. Like most Franco-Americans, I have a horror of hosting a gathering where there is not enough to eat. For me, ’tis the stuff of nightmares, akin to going out in public without any clothes on. So naturally I overcompensate, and usually there is so much food that I’m actually a little queasy long before we come to dessert.

If my knees hadn’t spoken up, so to speak, I might have conintued with my excessive ways for many more years. But after last year’s Fourth, when my knees protested mightily after going up and down the cellar stairs too many times, Clif came up with a solution, not only for the Fourth but for most of our other summer gatherings as well.

“Why not have drinks and appetizers so there is only one setting?” he said. “That’s what they used to do in the old days.”

It is true that the 1950s and 1960s were famous for their cocktail parties, where drinks and nibbles were served. Somehow, though, it seemed a little skimpy, but then I asked myself, How would I feel if I were invited to an appetizer and drinks party? Would I think it was skimpy? No, I would not. I would be absolutely delighted.

So the die was cast, and last summer we had several drinks and appetizer parties. Then an amazing thing happened—the appetizer theme crept forward to other events. Last Christmas, we had a houseful of dogs and cats, and not wanting to leave them for hours when we went to my brother and sister-in-law’s house, I suggested we come over for appetizers rather than for the usual big meal.

In truth, I had been worried that she’d be offended if we didn’t stay for a full dinner. Au contraire. The appetizer Christmas feast was such a hit that we all decided this should become an annual tradition.

But what really clinched it was when my friend Judy recently said to me, “Your appetizer parties have really inspired me. It’s such a great way to entertain without getting completely tired out.”

Indeed it is, and here we come to one of life’s lessons. (Drum roll, please.) As we age, we often can’t do as much as we could when we were younger. But that doesn’t mean we have to give up entirely. We can scale back and still have a good time. In fact, our friends, who are ageing right along with us, actually appreciate the scaling back, and they don’t find appetizer nights (or pizza nights) skimpy at all.

So lessen learned. Scaling back is not always a bad thing. In fact, it can be an extremely good thing, and in some cases, even better than the old way,

13 thoughts on “Lesson Learned: A Splendid Fourth with Plenty of Food”