After hearing the results about the Brexit referendum, I’ve been feeling jittery. I hope all goes smoothly and that there are no major upheavals in Britain or Europe. Or the world. We live in a very unsettled time, and there are many reasons for this—overpopulation, climate job, mechanization, even container shipping, which has allowed the cheap transport of goods from far away where the labor is even cheaper.

In Maine, when I was a young girl, factories were booming, and many of my relatives were able to make a decent living working in those factories. Today, the factories are pretty much gone, and the state’s largest employer is Hannaford, a grocery store chain that has mostly part-time workers who are paid low wages and get no benefits. Indeed, nearly one-third of the people in Maine earn less than $12 an hour, with about 23 percent making under $10 hour. Try supporting a family on that. Even with both parents working, it’s a tight, tight squeeze. (Nationwide, the story isn’t much better, with Wal-Mart being the country’s largest employer.)

With “austerity” being so much in vogue in the developed world after the financial crash of 2008, I expect many people in other countries are also feeling this squeeze, and people who are squeezed do not make the best or the kindest decisions. Immigrants and the poor become  scapegoats, and before you know it, things get really ugly.

So it’s no wonder I get the jitters. The gardens help.

So do friends—thanks, Judy and Paul, for coming over—and drinks on the patio. 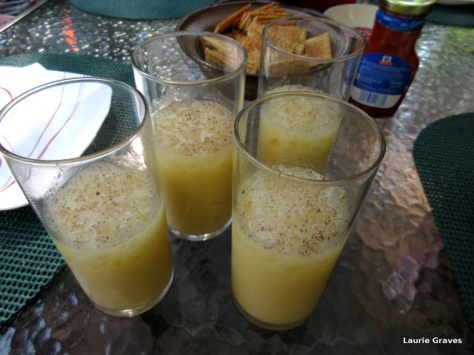 Onward we go, toward fall and our own elections, where the best we can do is vote for the lesser of two evils.

Thank goodness for the garden, the patio, friends, and, of course, drinks.

15 thoughts on “Feeling the Jitters”