On Sunday, our friends Joel and Alice and Diane came over for a Memorial Day gathering that featured grilled bread, salads, and homemade strawberry ice cream with homemade shortbread. Accordingly, Saturday was a busy day of getting ready. However, I did find time to work a bit in the garden, and I came upon this tiny fellow—a spring peeper?  (Eliza, what do you think?) 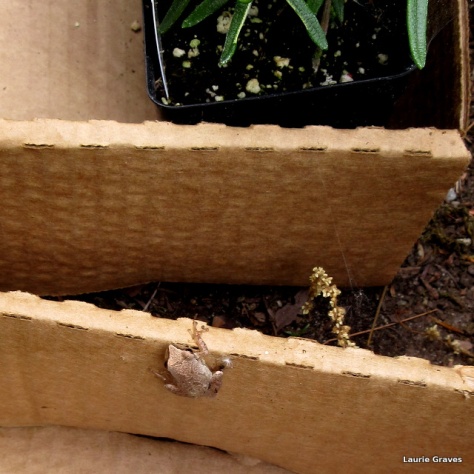 The little creature, about an inch long, bounced around as though it were on a spring, but I did manage to capture a picture.

Sunday was a little cloudy, but it didn’t rain, and it was warm enough to eat on the patio. We toasted loved ones who had passed as well as service men and woman who had sacrificed themselves for this country.

Clif’s legendary grilled bread was the centerpiece of the meal, and we had salads to go with the bread. I’m always afraid there won’t be enough to eat, but with the huge grilled bread, there was more than enough with the salads that Alice, Diane, and I made. (We, of course, had appetizers beforehand—chips and salsa and cheddar popcorn. ) We all decided that the bread and salad meal was a tradition we should continue. (Thanks, Alice, for providing the dough.)

I had enough presence of mind to snap a picture of the bread and salads, but not enough to get a picture of dessert.

Among other things, we talked about politics—lots to discuss!—and, as is our way—we also talked about movies. Diane made an interesting point. She is mentoring a student at Bowdoin College, and this student and her friends hardly ever go to the movies. They do, however, watch movies. One of the students has a TV, and they regularly get together to have pizza and watch a movie.

Diane reflected as to how our generation was the movie generation. We grew up going to the movies, and it was the thing to do with family and friends. But now, with the changes in technology—the quality of the image on flat screens is pretty darned good—combined with the high price of movie tickets and popcorn, going to the movies is not the regular event it once was. Someday, perhaps, when we baby boomers are gone, the cinemas will close because of lack of business. (I recently read in the New Yorker that the average teenager goes to the movies six times a year, and this matches Diane’s experience with her college students.)

As someone who grew up going to the movies, I must admit that it’s a little sad to think of this. But times change, and with services such as Amazon Prime and Netflix, there are plenty of good shows and movies to watch at home.

And who knows? Perhaps somehow cinemas will manage to hold on.

Finally, today—Memorial Day—is the 105 anniversary of my grandmother’s birthday. How old that makes me feel! Josephine Lena Jacques was born in northern Maine, in North Caribou, in a farmhouse that I expect did not have electricity or running water.  French was her first language, although by the time I was born, she was fluent in English. Her mother and father were potato farmers, and they went to town in a horse and wagon. The changes my grandmother saw in her lifetime.

Happy birthday, Mémère. Here is a pansy, one of my favorite flowers, in your honor.