In central Maine, the Fourth was not sunny. Instead, it was overcast, but it didn’t rain, and it wasn’t blindingly hot. Friends and family came over, and we were able to spend much of our time on the patio.

Alice brought two packages of her homemade sourdough bread, which Clif grilled. We fell upon that bread like hungry crows, and soon nothing was left. Jill brought a flag appetizer, and that, too, was promptly eaten. One thing is certain; we are all good eaters. (Jill, that semicolon is for you.)

Unfortunately, as hostess, I did not have the chance to take as many pictures as I would have liked. However, I did get Alice’s salad in shells, and I am hoping a recipe will follow.

Last but certainly not least, Diane brought lemon-curd tarts that were positively addictive. I couldn’t stop with just one.

We talked about many things—movies and the upcoming Maine International Film Festival was a big topic of discussion—but I am happy to report that we discussed the Declaration of Independence, the ratifying of the constitution, and George Washington’s reluctance to become president.

I was also able to tell a fun library story. The day before, on July 3, I was doing errands around town and listening to National Public Radio. On the way to the town’s transfer station, I heard an interview with Joseph Ellis who in his book The Quartet tells “the unexpected story of why the thirteen colonies, having just fought off the imposition of a distant centralized governing power, would decide to subordinate themselves anew. ” Ellis “argues the Constitutional Convention and creation of a viable nation-state was a top-down process, instigated and orchestrated by four prominent leaders.”

Sounded like an interesting book to me, and after going to the transfer station, I went to the library where—lo and behold—The Quartet was available.  I was very impressed that within a span of ten minutes, I had heard of this  book for the first time and then had it in my hot little hands. At our Fourth of July party, I was even able to share a George Washington quotation from the book: “I am so wedded to a state of retirement and find the occupations of a rural life so congenial with my feelings, that to be drawn in public life at this advanced age would be a sacrifice that could afford no compensation.” (It seems he was truly reluctant to become president.)

So there. Food, family, friends, and a bit of history about the founding of our country.

And, of course, beer, courtesy of my son-in-law Mike who works at Craft Beer Cellar in Portland. 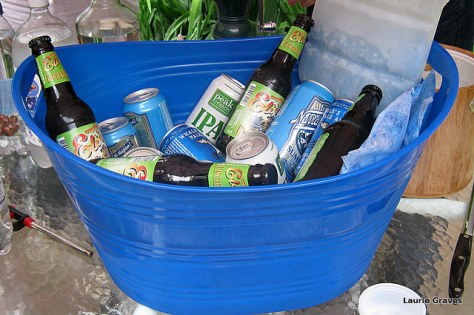 Between the beer and the Moscow and Maine mules, ’twas a very merry Fourth of July.

8 thoughts on “Our Gathering on the Fourth”