On Saturday, March 19, a heavy rain fell as though it were a day in April. If the rain had been snow, as it would have been in years past, Snow-Joe would have gotten quite a work out. Instead, the rain came down, down, down, and most of the snow went away, to be replaced by mud.

Here are pictures of the tracks I made going to the compost bins in the backyard. The mud was so deep that I wondered if I would lose my shoes on the way to and from the house.

As you might have guessed, Snow-Gauge Clif’s job is coming to an end. Barring any last-minute snowstorms, I expect we have a week or two at most.

The shady front yard still has 7 inches of snow at its deepest and a skim of snow over much of the lawn.

The backyard is quite another matter. There is a spot that has 7 inches of snow—where Snow-Joe threw it—but for the most part, the lawn is bare. 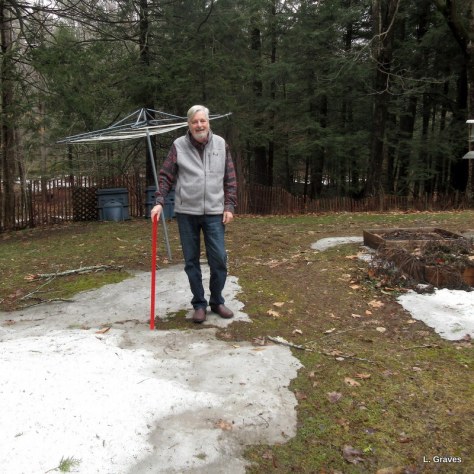 Here’s a better photo of the backyard. Note the patio and how the snow is nearly gone. As soon as the mud dries, and we can walk on the lawn without fear of losing our shoes, the blue chairs will come out. 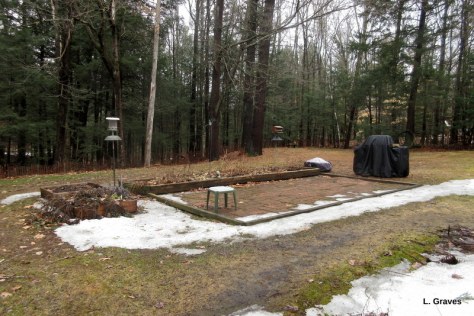 Finally, here’s a photo of our listing clothesline, which is a little on the tipsy side. When the yard dries out, Clif is wondering if he’ll have to reset the clothesline. Never a dull moment at our home on the edge of the woods. 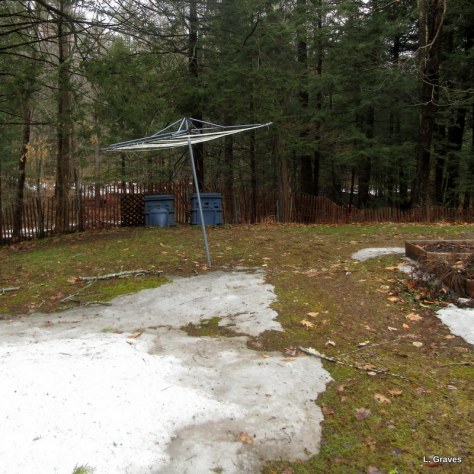 In Addition: Cheers to 45 years!

On Saturday Clif and I celebrated our forty-fifth wedding anniversary. We marked the occasion with an appetizer night featuring dumplings, a cashew dip, and other assorted goodies. Appetizer nights are a favorite at our home, where with a minimum of fuss and a maximum of enjoyment, we have many different treats to nibble.

There was also a toast where we used lovely glasses given to us by our friend Doree Austin on our first wedding anniversary.

After our appetizer meal, we watched a film that I highly recommend—Lunana: A Yak in the Classroom, a sweet low-key movie from Bhutan that has been nominated this year for an Academy Award for Best International Feature Film. 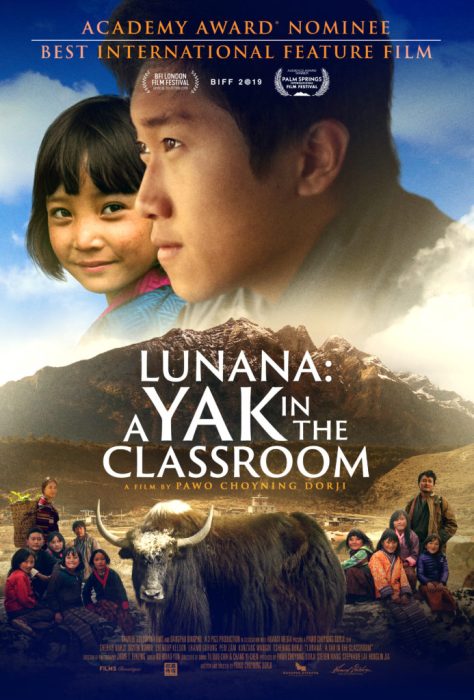 Filmed in Buhatan and written and directed by Pawo Choyning Dorji, this charming movie tells the story of a young, uninspired teacher, Ugyen Dorji, who is sent to a remote mountain village to fulfill his teacher contract. Does Ugyen want to go to this village, accessible only by foot and a journey of many days? He does not. Instead, Ugyen wants to go to Australia and follow his dream of becoming a singer.

But up the mountain Ugyen goes, finally making it to Lunana, a poor village that has some of the most breathtaking scenery I’ve ever seen. During the course of the movie, lessons are learned and taught. In its own gentle way, Lunana examines the notion of culture, of whether to leave or to stay.  Best of all, Lunana manages to avoid being predictable, which gives the movie a nice twist.

Lunana is definitely worth $6.99, and so far it is my favorite foreign film of the year.