This is the story of how one person can make a big difference in a small town. For the past nine years, Shane Malcolm Billings has worked at our town’s library—Charles M. Bailey Public Library. Shane’s official title was Adult Services Librarian, but like all people who excel at their jobs, Shane was so much more than that.

First there is Shane’s love of books. For a librarian, this should be a given. Why work in a library if you don’t have a passion for books? But for Shane, this love could rightly be called a devotion to literature and to writers. Maybe even a way of life. Small talk for Shane often revolved around books, such as how Anne Tyler can still write a fresh story even though she is nearly eighty.

Then there is his keen memory for the names of patrons combined with what they liked to read. In this way, Shane resembled a bartender in a local pub. But instead of serving drinks, Shane served books, and he had a nearly uncanny sense of what patrons would like to read, often before they did.

The following is a true story.

Several years ago, I went to pick up some books I had ordered through interlibrary loan. Among the books was Some Tame Gazelle by Barbara Pym. Shane happened to be working at the desk.

“You didn’t,” came Shane’s prompt reply. “I ordered it for you because I thought you’d like Barbara Pym, and I know you’ve never read her.”

Shane was absolutely right. I liked Barbara Pym so much that I ordered more of her books when I had finished Some Tame Gazelle.

As if all this weren’t enough, Shane is just plain fun to talk to. He has a wonderful sense of humor yet is sympathetic. Along with remembering books and writers, Shane remembers the names of patrons’ grown-up children who have moved away, and he always asks when they’ll be visiting.

But all good things eventually come to an end, and Shane is leaving our library.

Yesterday, there was a surprise farewell party for him at the lovely home of a library trustee. (There will also be an Open House at Bailey Public Library on Tuesday, August 20th at 6:00pm for the public at large to say goodbye to Shane.)

There weather was perfect—warm but not too hot with nary a mosquito to vex us.

Here are pictures from the party, starting with the setting. 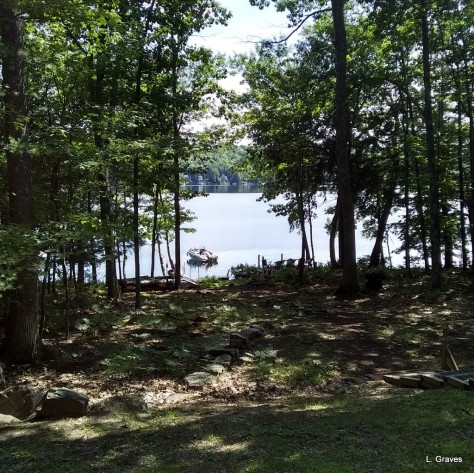 Shane arrived, was duly surprised, and was greeted with a kiss and a laugh.

There was plenty of mingling.

As well as lots of good food.

And, of course, cake.

Farewell, Shane. You have made this town a better place and how you will be missed. Best of luck with the next phase of your life, and whatever comes next, I know you will shine, shine, shine.

53 thoughts on “Farewell to Shane, a Librarian Extraordinaire”