It was another scorcher of a Fourth with temps in the 90s in the shade, and the humidity was high, too. Fortunately, the week before the Fourth was cool, which meant preparing for our annual  get-together was not as arduous as it has been in past years. (On Facebook last year, I wrote that July 3 was so hot that I felt like one of Dali’s melting clocks, which by the way I have seen at MOMA. The picture was much smaller than I had expected. Life is often like that, isn’t it?)

The heat did have one good effect—it kept the mosquitoes down so that we were able to gather on our patio rather than in our dining room. Here is a picture of the table filled with good food made by my friends and me.  A tip of the hat from Diane.

And because of the heat, we had plenty to drink, kept cold in ice. 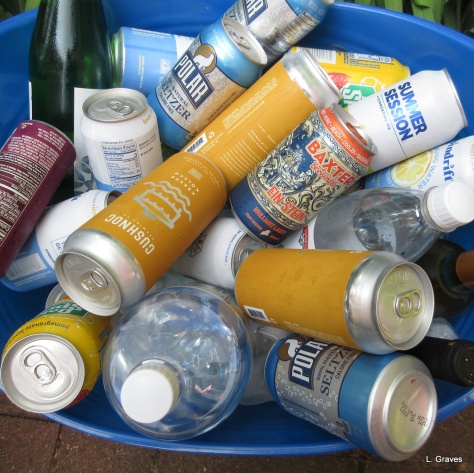 On the Fourth, it is customary to honor the past and the hard work of those who came before us. At our gathering this year, we did something different. Instead, we praised the younger generation for their grit, courage, and levelheadedness. We have left a terrible mess for them to deal with, and it makes my heart ache to think about it. While every generation has its slackers—ours certainly did, too—so far I am encouraged by the upcoming generations that are rejecting cars, McMansions, and food chains such as Applebee’s. (Let’s face it. The food is terrible and overpriced at Applebee’s.)

Therefore, let the bells ring for the younger folks, the promise of a better future. And know that in this corner of Maine, in the woods, Clif and I will be living as lightly as we can to “be the change we wish to see.”

We will also vote, of course. That almost goes without saying. And in September of this year, Clif and I will join the youth in their Global Climate Strike.

31 thoughts on “A New Way to Look at the Fourth”