Last week was a week of illumination, where I learned so much and also had so much fun. I guess you could call it a nearly perfect week of good movies, good food, a wonderful play, a fine lecture, and time spent with my nephew and daughter. Who could ask for anything more?

Once again, I am grateful that we live in a rural area with lakes, rolling hills, and forests yet also have access to plays, art, lectures, and independent movies. This definitely falls under the category of having the best of both worlds. We are also three hours away from Boston and seven hours away from New York City. In short, central Maine rocks.

First, the food. When Dee comes for a visit, one of her favorite meals is a waffle breakfast. I know this is bragging, but Clif’s homemade waffles are pretty darned good. We bring the waffle maker and batter to the dining room table, and out the waffles come, hot and fresh. This time, for sides, we had fresh strawberries and veggie sausages. (Dee is a vegetarian.) We had this breakfast not once, but twice.

Dee is a pizza hound as well as a movie buff, and it seems this pairing is not unusual. Next to Railroad Square Cinema is Grand Central Cafe, which makes pizza in a wood-fired brick oven. I am not a pizza hound, but I have to admit that Grand Central’s pizzas are very tasty.  The pizza featured below, which Clif and I shared, had cheddar, chicken, mushrooms, and barbecue sauce and was served piping hot.

And as far as Clif is concerned, pizza and beer go together the way chocolate and peanut butter do. This particular beer came from Bar Harbor. 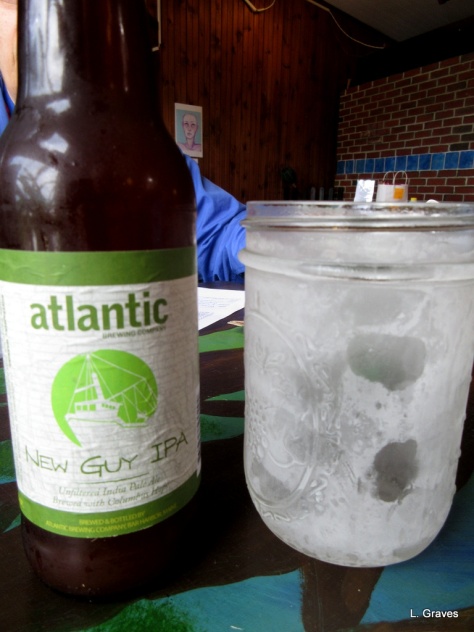 Now for the illumination. Colby College, a liberal arts college with an incredible art museum that has become a destination, is a major sponsor of the Maine International Film Festival (MIFF). This year, in conjunction with MIFF showing one of Disney’s most beautiful, films—Bambi—Colby hosted a lecture called “Bambi and the Art of Tyrus Wong” presented by the filmmaker and animation historian John Canemaker.

I had never heard of Tyrus Wong (1910-2016), a Chinese immigrant who suffered poverty, discrimination, lack of recognition, and at a young age, the loss of his mother. Despite the hardships, Wong became an animator extraordinaire who worked on Walt Disney’s Bambi. Wong’s luminous, Asian approach of soft, blended backgrounds enhanced the vivid, memorable characters in this movie.

During the lecture, I also learned that Bambi was based on Felix Salten’s 1923 Austrian novel, Bambi, a Life in the Woods. When I came home, I Googled Felix Salten and discovered that his book “was  one of the first environmental novels ever published.”

Unfortunately, I couldn’t attend MIFF’s presentation of the movie Bambi, a 35mm Academy Archive print shown on the huge screen at the Waterville Opera House. It meant leaving our dog buddy Liam unattended for too long.

And I saw some first-rate movies, which I’ll write about tomorrow.

18 thoughts on “An Illuminating Week”