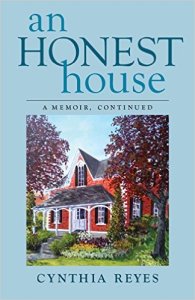 I’m going to take a break from promoting my book to sing the praises, as the saying goes, of another book—An Honest House: A Memoir, Continued by Cynthia Reyes.  As the title suggests, An Honest House is the sequel to A Good Home, and while you will definitely want to read both books, An Honest house stands by itself.

In An Honest House, Cynthia Reyes recounts the struggles of living life with chronic injuries she suffered during a car crash some years ago. She writes “Time passed. The injuries didn’t. It took me nearly two years to face it: instead of recovering, I was getting worse. Alone in the house one day, I admitted to a series of stark truths. Easy mobility? Gone. Independence? Gone. Eloquent speech, quick wit, easy confidence? Gone, gone, gone.”

And what do you do if you’re a successful journalist who has worked at the Canadian Broadcasting Corporation, when pain keeps you in bed much of the time, and your beautiful new house starts to feel like a prison? Many people would have given up, spending the rest of their days as a brooding invalid.

But not Cynthia Reyes. Her perseverance—a trait that no doubt made her an excellent journalist—propelled her forward. While she did spend time in bed, she also read, did household chores, took short walks, started a blog, and eventually wrote a book, the aforementioned A Good Home.

Along with her perseverance, Reyes was sustained by her faith, her friends, and her family, especially her husband, Hamlin. No one with such injuries could make it alone, or without proper medical care, which Reyes, a Canadian, certainly received.

Now, a book about dealing with chronic injuries could be become a dreary chronicle of misery and complaint. However, nothing could be further from the truth with An Honest House. While Reyes writes frankly about her struggles, the book is not a litany of woes. Instead it is a joyful, inspiring book. Despite the pain, despite the discouragement, a love of life thrums through the memoir, and it’s my guess that this love was as essential as her perseverance.

In addition, her stories about her Jamaican family leaven the book. As a Mainer and a homebody, I am not very familiar with Jamaican culture, and I loved those stories. I especially liked the one that described the naughty ways of Reyes and her sister, of how they stole fruit from a neighbor’s tree and then hid in the basement as they plotted to run away to escape punishment. Readers, the story has a happy ending, but I’m not going to reveal it. Read it for yourselves.

I do most of my reading at night, before I go to sleep, and some books keep me up long past the time when I should have clicked off my reading light. An Honest House is such a book. “One more chapter,” I would tell myself as I read the book. Then I would glance at the clock, noting how late it was. “Just one more.”

Finally, when it was very late at night or early in the morning, depending on how you look at it, I would reluctantly set An Honest House aside and shut off my reading light.

And that, readers, is the sign of a very good book.

33 thoughts on “An Honest House by Cynthia Reyes”