“All right,” Clif answered blithely, knowing as well I did that it had been a long, long time since we had made donuts and that we might be just a teensy weensy bit rusty. But one of the things I especially love about Clif is that he is always up for a cooking adventure, especially when it involves his deep fryer.

Alice accepted the invitation, and the game was on.

Alice is one of those friends that everyone should have. We are very good buddies, and I have known her long enough so that if there was a disaster with donuts, it would be all right.  We would just laugh about it.

Since Alice planned to come over around 11:30, I decided we should have a little lunch first, so I put together a platter of homemade chicken salad, which we gobbled up.

Then, it was on to donuts, and while it wasn’t exactly a disaster, we did have a few difficulties, the first being that I didn’t read the directions thoroughly. I dumped all the flour in the bowl at once, and this made it difficult for my little hand mixer to mix the dough properly. But the biggest kerfuffle was that the dough was too sticky for the donut cutters, and the dough stuck stubbornly inside the cutters.

Okay, more flour. Still too sticky. A little more flour. The donuts came out with a thump, but they were a weird shape.

Alice said, “My mother used to shake them into her hand.”

I tried doing this, and success!

“What was your mother’s name?” I asked Alice.

“Dorothy, but she liked to be called Dottie.”

“Thank you, Dottie,” I said, smiling and looking upward.

With a firmer dough and Dottie’s method, we were finally in donut-making business, with me cutting the donuts, Clif frying them, and Alice rolling them in sugar and cinnamon. 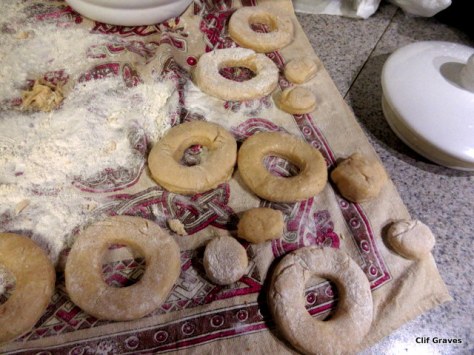 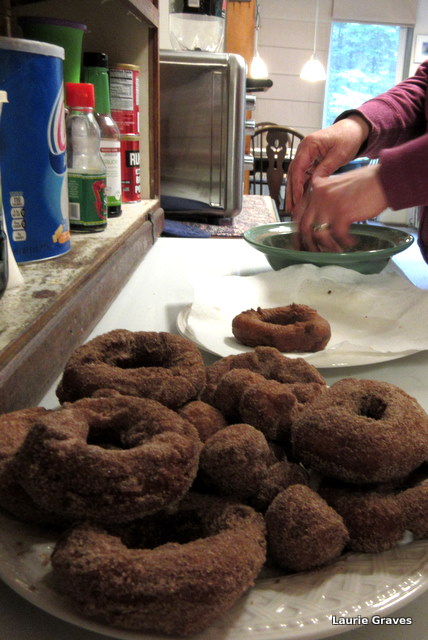 When we were done, we had two fine plates of donuts, and we settled around the dining room table with coffee and tea to go with the donuts. 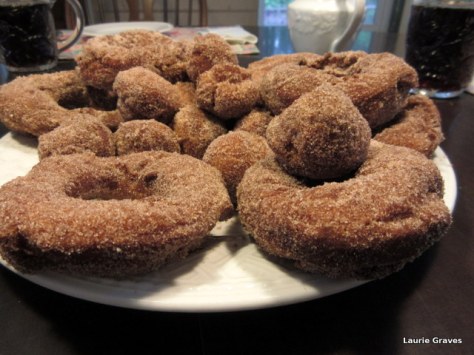 When warm, the donuts were delicious. However, as they cooled, they became a little too crusty for my taste. When I mentioned this to Clif, he said that the next time we made donuts, he would not fry them as long.

This just goes to show that even with something as seemingly simple as donuts, practice is required to get them just right.

Over the next year, we’ll be making half-batches of donuts so that they will come out exactly the way we want. That way, when National Donut Day rolls around in 2017, Clif and I won’t be such a bumbling team.

19 thoughts on “National Donut Day, In which Clif, Alice, and I Make Donuts”