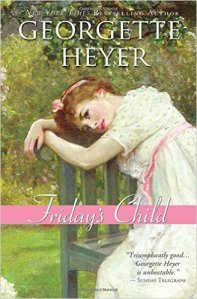 Every once in a while when, say, the political season just drags me down, and I simply hate the thought of having to choose between the lesser of two evils, I find myself turning to Georgette Heyer and her Regency novels for some relief. For the uninitiated, Georgette Heyer wrote Regency novels, lots of them, from 1932 to 1974, but according to Wikipedia, she also wrote thrillers, detective,  and historical fiction. In fact, Heyer is credited with creating the Regency romance genre, and she is well known for meticulous research and authentic period details. (Officially, the British Regency began in 1811 and lasted until 1820, and Jane Austen’s books were published during this period.)

All right. Let’s clear the air—Georgette Heyer was no Jane Austen, who while writing about love and the upper class, delved into the condition of women and the cruelties of the British aristocracy.  Heyer, while not ignoring the excesses of the upper class, blithely skimmed across them. Simply put, Austen is deeper than Heyer. Also, Heyer’s writing style is not as fine as Jane Austen’s. There, we’ve gotten that out of the way.

But what fun Georgette Heyer’s novels can be, and sometimes, fun is exactly what a person needs. Recently I came across Heyer’s Friday’s Child in my bookcase, and I decided it was exactly the right book to distract me from the political season. And so it was.

Friday’s Child is equal parts romance novel, farce, and screw-ball comedy,  and Heyer whips the reader through the first months of the improbable marriage of the very young Hero Wantage and the self-centered Lord Sheringham (aka Sherry). Hero and Sherry have known each other from childhood, and when Sherry comes upon Hero, a poorly-treated orphan who is down in the dumps because her guardian and cousin is insisting that Hero go to Bath to become a governess, well, Sherry does what any high-minded young male of the Regency era might do—he proposes marriage. (An added inducement is that Sherry won’t come into his large inheritance until he marries.) Hero, who has been in love with Sherry since she was very young, immediately accepts the proposal.  In today’s parlance, it is a win-win situation.

Off to London the pair go, where Hero gets into one “scrape” after another. Hero, who falls into the category of the adorable but naive heroine, must be schooled by Sherry and his friends, well-meaning but imperfect and hilarious teachers. Most of Hero’s mistakes involve making the wrong sorts of friends and going to the wrong sorts of places, thus opening her up to public shame and snubbing. However, on a more serious note, both Hero and Sherry run up huge debts while gambling.

Unlike most romance novels, the central concern of the story isn’t whether the two protagonists will end up together—indeed they are married early in the story. Instead, the plot revolves around Sherry, who must learn not to be so selfish and to fall in love with his sweet but hapless wife. I must admit that as I chortled my way through Friday’s Child, I wasn’t particularly worried about this. With all such novels, the destination is never in doubt. Instead, it is the delightful journey that matters.

Friday’s Child, like all of Heyer’s Regency novels, is a bonbon of a story.  As it is with many rich sweets, one is definitely enough, and it will probably be quite a while before I read another of Heyer’s books. (Richard Russo’s Everybody’s Fool is waiting for me at the library.)

Still what a delight to read a book that made me laugh out loud.  And while Friday’s Child certainly falls into the guilty pleasure category, the New Yorker’s blurb on the back of the book gets it exactly right: “Nimbel, light-hearted…Almost too good to be true.”