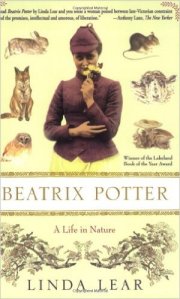 A few weeks ago, my friend Cheryl, knowing how much I love England and books about nature, recommended that I read Beatrix Potter: A Life in Nature by Linda Lear. As luck would have it, the book was available in our library, and I checked it out.

When most people think about Beatrix Potter, Peter Rabbit and all the small animals in her other stories come to mind. And how you feel about Beatrix Potter often depends on how much you like charm and fancy. I must admit that I am a sucker for such things. Seldom is anything too fanciful for me, but I do understand how some people might find Potter’s work a little too twee. Those trousers, that hat, the little dress, and on a rabbit, duck, or pig.

However, as Linda Lear makes it clear in her lengthy but absorbing biography of Beatrix Potter, the creator of Peter Rabbit was a multi-talented, extremely bright woman who made herself useful in a time when women of her class were not expected to do much. Peter Rabbit and the other animal tales were but one aspect of this complex woman.

Born in 1866 to parents who were extremely conservative and overprotective—some might say smothering—Potter was nonetheless encouraged to draw, paint, and explore nature on summer trips her family took to England’s Lake District and to Scotland. As a young woman, Potter become fascinated by fungi, and she spent much of her time painting and observing them. Eventually she came up with her own theory of germination and spores. (This was in her pre-Peter Rabbit days.) She submitted a paper “On the Germination of the Spore of Agaricinea” to the Linnean Society in… 1897.”

Lear writes, “The Linnean Society did not reject Potter’s paper because they never seriously considered it….Beatrix was too insignificant a player for the establishment to be concerned with. To have noticed her would only have called more attention to her unwelcome and unproven theories…That they were antagonistic to her as a woman and as an amateur goes without saying, and their bad manners account for the LInnean Society’s official ‘apology’ for the sins of historic sexism a century later.”

And that was that. Except for Beatrix Potter, it wasn’t. Over the years, she had written picture letters to the children of a former Governess, Annie Moore. “Annie Moore suggested that some of {Potter’s]  pictures letters could be made into interesting books for little children….Beatrix was taken by the idea.”

Hence, Peter Rabbit was born, to be followed by Benjamin Bunny, Jemima Puddle-Duck, Jeremy Fisher, and various other characters that would become beloved by generations of children. I don’t think I’m spoiling anything by revealing that Potter’s books sold very, very well. In addition, Potter, who was a brilliant marketer—is there anything this woman couldn’t do?—came up with what we would now call spin-off products: games, dishes, stuffed animals, and various other related items.

Peter Rabbit and Company made Potter an independently rich woman. To add to Potter’s wealth, an aunt died and left a substantial inheritance to her niece. Did Potter then decide to rest and retire in style, say, taking in the sights of Europe or taking a trip around the world?

She did not. Instead Potter continued to write, bought land in the Lake District, got married at age forty-seven, started raising sheep, and bought more land—well over 3,000 acres, which she would later donate to the National Trust so that the land would be preserved after her death.

This review is just a survey of this remarkable woman who was so enormously talented and creative yet did not believe in women’s suffrage. (I certainly have a hard time wrapping my mind around that contradiction.)

Lear’s biography accomplished what a good biography should. It expanded my appreciation of the subject, whom I had taken for granted as a children’s writer, which, in all fairness, would have been enough. Little did I know of Potter’s other accomplishments, this energetic Victorian who blazed through life, turning her attention not only to rabbits and ducks but also to fungi, sheep breeding, and land preservation.

17 thoughts on “Beatrix Potter: A Life in Nature by Linda Lear”