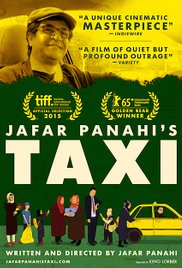 Last Saturday at Railroad Square, we saw the Iranian film Jafar Panahi’s Taxi. (It was part of a film series—Cinema Explorations—that Clif and I help organize.) The filmmaker, Jafar Panahi, a gadfly of the Iranian regime, has for some years been under house arrest and has been forbidden to make films. His response? Make movies that pretend not to be movies but of course really are movies. Hence, Taxi, where he flouted house arrest to drive around Tehran in a taxi and film various passengers and their conversations.

I was especially taken with the section of the movie where Panahi picks up his teenage niece Hana from school. Hana is a budding filmmaker, and she carries her trustee Canon camera around so that she can shoot street scenes as her uncle drives through Tehran. Panahi and Hana talk about making movies, and she worries about the filming restrictions her teacher has placed on her. The teacher’s list is long, but “sordid realism” is a particular bone of contention for Hana.

Now, when we Americans think of the term “sordid realism” what might come to mind can be very nasty—graphic sex, graphic violence, disturbing behavior, bad language. I must admit that I tend to avoid movies that dwell too much on what I consider sordid realism. However, if a movie is very good, then I will make exceptions.

But to the Iranian censors, sordid realism means something quite different. Instead, it is a term—almost doublespeak—applied to anything that might make Iranian society look bad. In the niece’s case, it applies to a young street boy who steals money dropped from a bridegroom on his way to his car after his wedding. Hana has filmed the theft, and tries to convince the young boy to return the money. However, things don’t go exactly as Hana wants, and the boy ends up with the money.

After her uncle drives away from the boy, Hana frets about this at some length, knowing that her film won’t win any prize money if it contains such sordid realism as a street boy stealing money. And without the prize money, how can she go on to make a better film next time?

How indeed? I expect that Hana’s worries are also shared by her uncle. How can artists create with such unreasonable restrictions and censorship? As Panahi so deftly illustrates with this movie, it can be done. But at what cost?

As I mentioned earlier, I am not a fan of what I consider sordid realism, but unless animals and children are harmed in the process, I firmly believe that filmmakers have the right to make the kind of movies they want. For example, I have never seen the The Wolf of Wall Street. Too many friends have warned against it for the sheer ugliness of the sex scenes. But that is my individual choice, one that I don’t necessarily expect others to make.

And that makes all the difference.