Last Friday, a hard rain came. It beat down the backyard garden, making the already ragged bed look even more ragged. The bee balm is helter-skelter, and the phlox has been bent so far down that it is touching the patio.

However, to borrow from Jason from his excellent blog Garden in a City, the weather has gone from being hot and humid to cool and humid, which is an improvement. Still. I mourn the old days in Maine when August was hot—but not too hot—and dry with cool nights. How I loved those days, which we have not had for many, many years.

I will do what I can for the gardens. I’ll prop up the phlox so that it is not touching the patio anymore. I’ll cut the flowerless stems of the daylilies, which were spectacular this year. They, it seems, love the humid heat. I’ll also sweep the patio. But I won’t do any major cutting back for another month or so. Clif and I both agree that we would rather have a ragged garden than one that looks as though it’s been given a crew cut.

After the hard rain, I went out to take some pictures, and I will admit I got some nice photos of a variety of phlox that had not been beaten down. 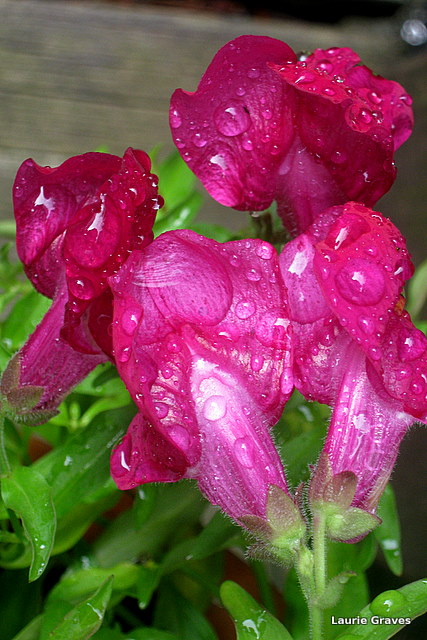 As do the hens and chicks, veiled by a spider’s web.

As I was taking pictures in the front garden, a little frog hopped out of a low bird bath and disappeared into the tall growth. Too quick for me to get a picture. Unfortunately.

Another consolation is that even though August is humid, the crickets still sing their high, sweet song. It wouldn’t be August without them, just as it wouldn’t be spring without the peepers. When you live in the country, you look forward to the voices of the natural world that come with each season—the peepers, the loons, the wood thrush, the buzzing grasshoppers, the crickets. What a loss it would be not to have them!

At night, the windows are open in my bedroom, and I fall asleep listening to the crickets, who will sing until the cold silences them. By then my windows will be closed, and one frosty night when I return home from, say, book group at the library, I will notice that the crickets are no longer singing. Next year, next year they will sing again.

It’s my guess I’ll have another few weeks where I’ll be able to leave my windows open and be soothed by the crickets’ song as I fall asleep.

4 thoughts on “Phlopping Phlox and the Crickets’ Song”