Yesterday, we had a chainsaw man—aka Dan Burns—come to Bailey Public Library. But don’t worry—nothing was destroyed or cut down. Instead something beautiful and unique was created. Dan Burns, of Burns Bears, is not kidding when he calls himself a “Pro Chainsaw Carver.” How Burns manages to coax various animals—bears, eagles, and in this case, owls for the library—out of stumps and branches will remain a mystery to most of us. But coax them he does, and Bailey Library now has a charming sculpture of three owls surrounded by books.

Burns brought the sculpture partially finished and added books, letters, numbers, and another owl. For two hours he took his chainsaw to the pine branch, used various flames to give the wood depth, and did a bit of spraying as well. The finishing touches were eyes for the three owls.

I was there with my trusty wee camera—what a wonder it is—and I took pictures of the process. What a fine addition those owls will be in our newly expanded library. One more gem in a gem of a library. 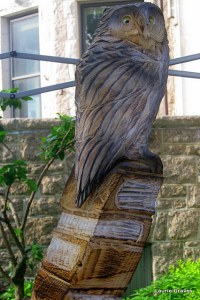