Clif and I love soup, and living in Maine gives us the opportunity to eat soup nine months of the year. (I’m counting June, which is often rainy and cool.)  Soup has so many things in its favor. A bowl of soup is warm and filling and comforting. It is forgiving and lends itself well to improvisation. Soup is often low in calories and usually can be made in a slow cooker. As if all this weren’t enough, most soups are very economical to make. Yes, indeed. There is a lot to like about soup.

Thanks to Farmer Kev and his winter CSA share, I have packets and packets of frozen vegetables in my freezer. Soups are the perfect way to use frozen peppers, beans, and zucchini, and over the winter, I’ve made quite a dent in those packets.

Last week, I was in the mood for a Southwestern soup. I had everything I needed—dried white beans, Farmer Kev’s frozen vegetables, onion, garlic, spices, tomato paste, and soy sauce, which I put in many soups to give them more of that coveted umami flavor. I also had some chicken sausage and chicken broth.

I seldom use canned beans, which always taste tinny to me. I much prefer the flavor of beans I cook myself, and since I am home all day, I have ample time to soak the beans overnight and then simmer them the next morning. For this recipe, I soaked two cups of white beans, which gave me about six cups of cooked beans. ( If time is of the essence, then by all means use canned beans. The soup will still be good.)

Basically, I chopped the vegetables into small bits, browned the sausage, and threw everything, including beans and spices, into the slow cooker. By the time Clif came home from work, the house was fragrant with the smell of bubbling soup—-another point in soup’s favor that I forget to mention in my opening paragraph.

I made a huge slow cooker full of the soup, thinking I would freeze some if we grew tired of eating it. However, this didn’t happen. We gladly ate the soup for three nights—Clif always has seconds—and didn’t mind one bit. 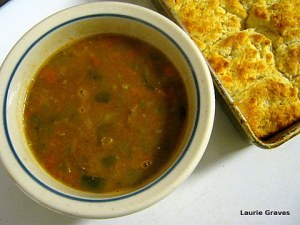 This soup couldn’t be easier. Basically, when everything is chopped and browned, put the ingredients in a slow cooker and let them come to a simmer. On high, this soup takes about four hours. On low, seven or eight hours. When the soup has bubbled for a while, taste it to see if more spices need to be added. Serve with dollops of sour cream, or eat it plain. As you like it.

Biscuits or cornbread make a mighty good accompaniment. If I were serving this to company, I would add chopped cilantro as a garnish.