Last night, as a plane flew overhead, I could tell from the sound that it was snowing outside. It’s hard to describe exactly what this sound is, but I would have to say that it has a muffled quality that is missing during  clear weather.

A little later, Clif let the dog out, noted the snow, and confirmed my suspicions. Unconcerned, we went to bed. This is April, after all.

Imagine our surprise, then, the next morning when we looked out the window and saw that at least four inches of heavy snow had fallen during the night. It was enough so that Clif had to haul out Little Green and clean the driveway before he went to work. And here we were thinking that it was just about time to bring Little Green down cellar for the season and time to bring out the bikes. Not yet, that’s for sure. 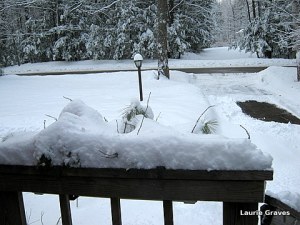 A little while ago, the plow went by, and the road is a mucky mess. No walk for the dog today. He’ll have to make do in the backyard. However, as I write, the snow is sliding off the branches of the trees. A few days of mild weather will bring us back to where we were before this mess, and the dog and I can walk on dry roads.

It has been a cold, hard winter in Maine, with lots of snow. Spring is officially here, but it is coming oh so slowly in fits and starts. Meanwhile, California suffers the worst drought in recorded history, and yesterday the temperature in Georgia was 90 degrees, which must be hot even for Georgia in April.

In Maine Lakes Tell Tale of Climate Change, a recent piece on MPBN, Susan Sharon addresses the issue  of global warming and writes, “While the Northeast may have experienced a bitterly cold and snowy winter in 2015, the average temperature on the planet last year was the warmest in 135 years of record keeping. In Maine the state climatologist’s research indicates that by 2050 the annual temperature in Maine will rise another 3 to 5 degrees.”

But what bothers Zach Wozich, an Ice fisherman interviewed in Sharon’s piece, is the extreme unpredictability of the weather over the past ten years, “the big variations in temperatures and snowfall.” This year, he’ll probably have two more weeks than usual to fish. A few years ago, the ice was out before the end of March. That year Clif and I actually went for an anniversary bike ride—on March 19—and Maranacook Lake looked like a huge, gray slushy. Not long after, there was open water.

There is some indication that as the Arctic melts, the jet stream is affected, bringing colder weather to the North East and warmer weather, along with drought, to the West. Only time and observation will tell if this is true. One or two cold winters do not a trend make, and there are other factors that affect the jet stream.

Nevertheless, for next winter, Clif and I will be sure to have a good supply of wood. (We ran out midwinter.) We will have a stockpile of food in our pantry as well as plenty of propane cannisters for our camp stove. Lamp oil is also a necessity and so is stored water in big buckets. For us, no power means no water.

Being prepared cannot change the weather, but it can certainly make fierce storms and power outages easier to deal with.

6 thoughts on “When, What to My Wondering Eyes Should Appear…But Snow, Snow, and More Snow”