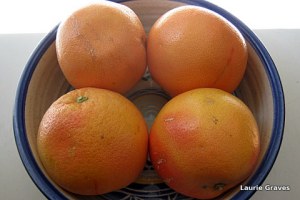 Among foodies, there is a lot of hand-wringing about how Americans eat. The general feeling is that we eat too much of the wrong kind of food, which in turn makes us fat and unhealthy. Alas, there is some truth to this. We are an overweight country, with an increasingly large number of children suffering from obesity and diabetes. As anybody who shops regularly at a supermarket can attest, many of the aisles are filled with food that should only be considered treats to be eaten sparingly as they do little to nourish our bodies. (I also want to point out that there are good things to eat, too—fruit, cheese, vegetables, rice, rolled oats, beans. Somebody must be eating these things or the stores wouldn’t stock them.)

In addition, Americans are often chided for how little money they are willing to spend on food.  In Treehugger, Margaret Badore writes, “According to the USDA Economic Research Service, 6.7 percent of consumer expenditure went towards food in 2013. Compare that to 9.3 percent in the United Kingdom, 13 percent in South Korea, 15.7 percent in Brazil, 26.1 percent in China, and 29.6 percent in India.” (I keep close track of our household expenditures, and Clif and I spend 13 percent on food. I guess we’re above average in that sense.)

As someone who is, ahem, food obsessed, I think about these things, too. Why are we such a fat nation? Why don’t we spend more on food? Why don’t we eat better? We know better, and this is true for those who struggle with poverty as well as for more affluent folks. For many years, I volunteered at our local food pantry, and how grateful the recipients were when fresh fruit and vegetables were available.

First, let’s consider cost.  We have a government that subsidizes what has come to be known as Big Ag, those mega companies with their mega farms that grow vegetables—corn, soy, and wheat—that are not meant to be eaten in their original state but are instead processed with sugar, salt, and fat and many ingredients that are unpronounceable.  This type of food is highly profitable, and many people have a huge appetite for it.  (I don’t exempt myself from this group of people. If I’m going to be honest, I have to admit I have a weakness for Double Stuf Oreos.)

Nevertheless, despite the Big Ag subsidies and the relatively low cost of food, many Americans feel financially stretched, and cutting back on how much is spent on groceries is one way to trim a budget.

And why do Americans feel so financially stretched? Unlike most European countries, our government has been pretty stingy when it comes to subsidizing health care, transportation, higher education, childcare and affordable housing. These things take a huge chunk out of our budgets, to the point where there is often little left over for much of anything else. (I do want to note that Obamacare has mitigated much of the misery caused by lack of health insurance—I know a woman, pre-Obamacare, who lost her house because she had to choose between paying for cancer medication and her mortgage. She chose life.)

However, money isn’t the only way Americans feel stretched. We also feel stretched for time, and I expect this also has a big effect on how we eat. In most families, both parents work outside the home. They rush to get the children to school or daycare, they rush to work, and then they rush to get back home to their children, who might be involved with sports or other activities. We live in a rush, rush society where we always feel harried, where we barely have time to comb our hair much less prepare a home-cooked meal. And this is true for parents at every economic level.

To add to this harried feeling, Americans have fewer vacations than Europeans—the French pretty much take off the whole month of August. Indeed, many Americans—those who work in low-paying service sector jobs—don’t have any vacation time at all. The same applies for maternity leave and sick time.

Is it any wonder, then, that so many Americans feel stressed? Is it any wonder that so many people turn to fast food for both convenience and comfort? There it is, dinner in a box or in a bucket, with very little preparation required. After a long day of rushing, how soothing it is to eat that salty fried chicken or burgers and fries, washed down with a shake.

I have an immodest proposal. Actually, I have two immodest proposals. First, let’s take some of the money we use to prop up Big Ag, and instead use it to help small farms and to subsidize services that are for the common good—health care, affordable housing, public transportation, childcare, higher education. If people felt less pinched financially , then they just might be willing to spend more money on food.

Second, let’s give Americans more vacation time, more time away from work, more maternity and sick leave. If they felt less pinched for time, then they might actually find the energy to serve more home-cooked meals.

I am not optimistic that my immodest proposals will be implemented anytime soon. There is too much big money dependent on keeping things just the way they are. However, who knows what might happen if we spent more money on the common good and gave people more time off?

Maybe, just maybe, we wouldn’t have such an obesity problem.