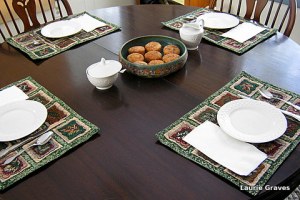 Not long ago, when I was having tea with my friends Mary Jane and Liz, the conversation turned to Marion Healey, a Winthrop resident who died a little over a year ago. Marion was one of Winthrop’s prominent residents. For forty years she worked as the treasurer/manager of the Mill Workers Credit Union, now the Winthrop Area Federal Credit Union. Indeed, the new building was named in her honor.

But what we spoke of were two traits that made Marion especially dear to the community—her hospitality and her intense interest in other people. Mary Jane said, “Being around Marion’s table was one of the best places to be. Once when I visited, I remember how she wanted to know all about my life before I came to Winthrop.”

I understood exactly what Mary Jane was getting at. When you talked to Marion, you felt as though she was giving you her complete attention, that you really mattered. A priceless gift and small wonder that she was so beloved in Winthrop.

When Liz and Mary Jane left, I thought more about Marion and her wonderful hospitality. I remembered my own parents and the many people they welcomed into their home. It was a rare week when someone didn’t come over. If the numbers allowed, we almost always gathered around the kitchen table. Coffee was served along with some kind of treat, often homemade. (My mother was a terrific baker and could bake almost anything.)  I come from a gregarious ethnic group—Franco American—and there were always lively discussions around that table.

At the little house in the big woods, we are blessed with a good size dining room. In the center is a dark round table my mother-in-law bought at an antique shop in Bangor. The original  chairs, stuffed with straw, wore out long ago, and it’s my guess the table was made sometime during the late 1800s. The table came with two leaves, which means ten people can be comfortably seated.

I have carried on my parents’ tradition of inviting people over and gathering around the table. Sometimes it’s for a meal, but sometimes it’s just for muffins and tea and coffee. Yesterday our friends Joel and Alice came over. I made French donuts, and we talked about the things we love to talk about—books, politics, and movies. I can’t think of a better way of spending a winter’s afternoon.

Next week, our friends Beth and John will be joining us for Sunday brunch. A couple of weeks later, other friends will be coming for tea, muffins, and talk.

These gatherings are not elaborate, and they are inexpensive. What Clif and I are giving are the gifts of time and hospitality. Marion valued these gifts as did my parents. In our hectic world, it is easy to become so caught up in busyness that we forget to give these gifts.

But these gifts are so worthwhile, and Clif and I will continue to gather people around our table for as long as we can. As Marion so beautifully illustrated, these gifts can ripple outward long after a person has passed.