A couple of weeks ago, Clif and I went to see a movie called The Kid Who Would Be King, a modern retelling of the King Arthur tale. We had seen the trailer, and  being either young at heart or in a state of arrested development—take your pick—we could tell right away that we would like this movie. 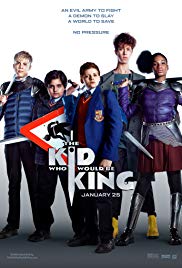 And we were right. Although the delightful The Kid Who Would Be King is aimed at a young audience, it is also a crossover movie that adults will enjoy.

Here is a short synopsis. In modern-day England, life is going to heck in a handbasket, and there is the clever use of newspaper headlines to illustrate this. (Brexit, anyone? ) What England needs is a hero to help restore some semblance of order and defeat the dark forces led by King Arthur’s sister Morgana, imprisoned underground and itching to get out.

Enter shining-faced Alex (Louis Ashbourne Serkis, son of the great Andy Serkis). Alex is the modern-day Arthur, living with his single mother, bullied by older kids, and the defender of his best friend, who is also bullied. When Alex finds an embedded sword in a construction site, he, of course, easily removes it. Merlin is summoned, and the adventure begins. Alex must assemble a team and face his own sorrows before he can confront the wicked Morgana.

The movie goes at a cracking pace. The children are terrific, the special effects are great, and the adult actors did a pretty good job, too. Elder Merlin is played by Patrick Stewart, which seems only fitting. After all, Ian McKellen has played Gandalf in the Lord of the Rings movies. Younger Merlin is played by Angus Imrie, who did a fantastic job portraying the otherworldly Merlin. Imrie is someone to watch for in future movies.

By now readers might be wondering how this movie ties in with the world of blogging. It just so happens that Joe Cornish, the writer/director of The Kid Who Would Be King (and also the wonderful Attack the Block) has a direct connection with Tootlepedal, one of my blogging friends. Cornish is the partner of Tootlepedal’s daughter.

Did Tootlepedal and his wife get to go to London for a special screening of The Kid Who Would be King? You bet they did, and Tootlepedal chronicles this event in his post King Size Entertainment. Oh, the excitement!

I know. Clif and I are movie nerds along with being many other kinds of nerds.  So it was a real treat for us to discover this connection between Tootlepedal and Joe Cornish, whom we have long admired.

27 thoughts on “The Wonderful, Interconnected World of Blogging”

Leave a Reply to A Curious Introvert Cancel reply