Every spring, mud comes to Maine as regularly as the tourists do in the summer. Usually mud season begins Mid-March.  But this year we had so much snow that the mud has not only come later but also with a vengeance that is astonishing even to this Mainer, who has seen her fair share of mud seasons.

Yesterday, I almost lost my shoe in the mud by our house, and Liam hates to walk through it to get to the backyard. Unfortunately, he doesn’t have any choice, and he comes back quite literally as a mud puppy. We wipe him as best we can, but oh, my kitchen floor.

Behold the muddy walk in the backyard, which is ever so much worse in reality than it is in this photo. 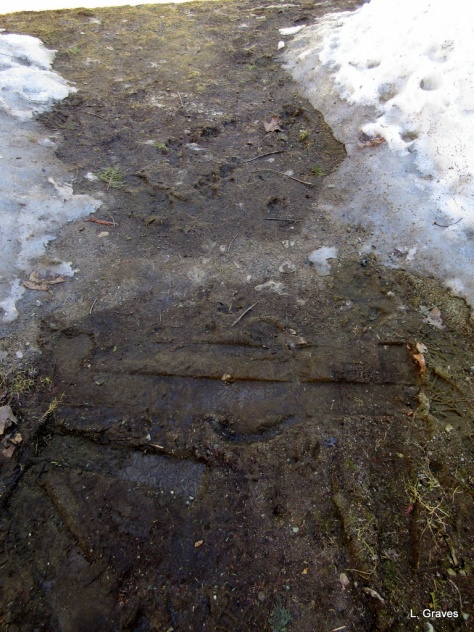 Clif and I were starting to despair, but last night, salvation came from an unlikely place—Facebook. One of my Winthrop  friends, who breeds dogs, wrote about how her dog yard was so muddy that she needed to get bales of straw to cover the mud.

Bales of straw? Immediately, the idea appealed to me.

Where, I asked, did she get the straw?

This morning, lickity-split, Clif went to Paris Farmers Union for a bale of straw. The clerk who helped Clif told him that one man had come to buy five bales for a  driveway that was so muddy it was nearly impossible to walk on it.

This just goes to show that things could be worse. Our driveway is all right. It’s the walkways to and around the backyard that need help.

The bale was loaded in our trusty Honda Fit, one of the best little cars we have ever owned. 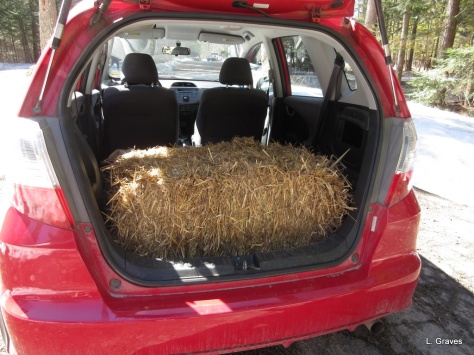 Clif removed the bale and was ready to go. 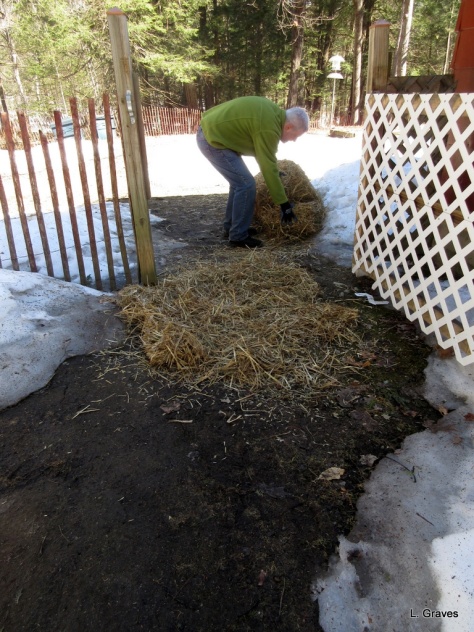 And how did Liam like the straw walks in his backyard? He liked them very much indeed, and Liam has resumed his rambles around the backyard. (Liam had such an aversion to walking in mud that he reluctantly did his business and then immediately wanted to come back in. Don’t blame him a bit for not liking to trot through the mud.)

The straw doesn’t entirely eliminate muddy paws, but it sure does help. We still have to wipe Liam when he comes in, but at least he doesn’t track all over the floor.

33 thoughts on “The Merry Month of Mud”