Yesterday, I took my friend Esther out to lunch to celebrate her eightieth birthday, which, in fact, was the end of November.  However, between the holidays and bad weather, there really wasn’t a good time for me to take her out before Christmas, and we settled on January.

Indeed she would. For recent readers who might not be familiar with Esther, here is a brief history of how we became friends. I met Esther through my mother. They both lived in Vassalboro, a small town in central Maine, about eight miles from Waterville and twenty-five miles away from where I live. As Esther put it, “Your mother was the best friend I ever had, and that kind of friendship doesn’t come along very often.” No, it doesn’t.

I often got together with my mother and Esther for lunch, tea, and other events, and over the years, she became my friend, too. When my mother died ten years ago, I continued my friendship with Esther. Not only do I enjoy Esther’s lively company, but she also provides a connection to my mother, and this means a lot to me.

As if all this weren’t enough, Esther is also a treasure trove of stories about rural life in Maine in the 1940s and 1950s, a time that seems nearly as remote and as different as the pioneer days. Esther was born in Vassalboro, and her family was very poor. But because they lived in the country, they were able to grow a lot of their own food.

“We hardly went to the grocery store,” Esther said. “Going to Waterville was a big occasion. For meat, we mostly ate deer, and when my father got one, we all gathered around the piano, sang songs, and celebrated. But I hated having to help cut up the deer. The flesh still smelled so alive, and it reminded me that the animal had been living not long ago.”

I nodded sympathetically, marveling at her country grit. I tried to picture myself butchering a deer when I was a young girl, and here my imagination failed me. I know I couldn’t have done it.

Esther said, “My father might have killed deer, but when he was haying, he always went in a big circle around nesting birds. He didn’t hunt for fun. He hunted for food.”

Again, I nodded. Hunting for food I understand but killing for fun, I do not.

“We ate some of the meat fresh,” Esther continued. “But my mother canned a lot of it for the winter.”

As Esther spoke, I thought about my own mother, of how she, too, grew up in poverty. My mother lived with her single mother and her grandmother. But they didn’t live in the country where they could grow much of their own food. Instead, they lived in a tiny apartment in Skowhegan, a small mill town up the Kennebec River from Waterville. But it seems my great-grandmother was a resourceful cook, and my mother often marveled at how even when there cupboards were bare, my great-grandmother always managed to put something together for supper.

Esther is one of those people who really does have a twinkle in her eye, and she responded, “When I wasn’t good and I wasn’t old.”

Here’s a picture I took of Esther yesterday at Joseph’s Fireside Steakhouse in Waterville. 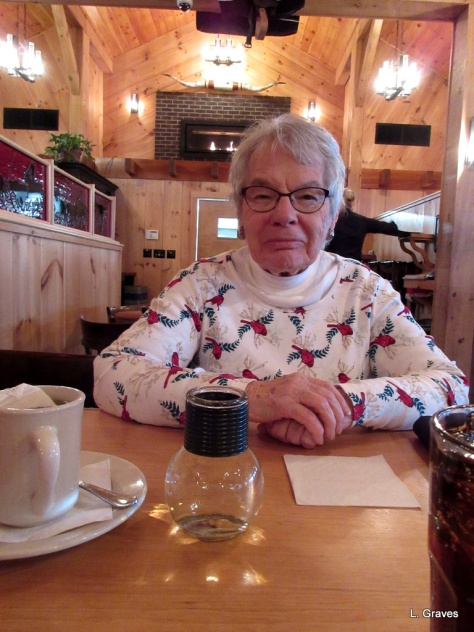 Happy birthday, Esther! May you have many more.